The Killer Next Door – Alex Marwood 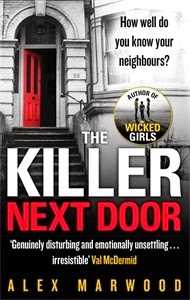 No. 23 has a secret. In this gloomy, bedsit-riddled South London wreck, lorded over by a lecherous landlord, a horrifying collection quietly waits to be discovered. Yet all six residents have something to hide.

Collette is on the run from her ex-boss; Cher is an underage children’s home escapee; lonely Thomas tries to make friends with his neighbours; while a gorgeous Iranian asylum seeker and a ‘quiet man’ nobody sees try to keep themselves hidden. And there for them all is Vesta, a woman who knows everything that goes on in the house – or thought she did.

Then in the dead of night, a terrible accident pushes the six into an uneasy alliance. But one of them is a killer, expertly hiding their pastime, all the while closing in on their next victim…

As a cloying heatwave suffocates the city, events build to an electrifying climax in this brilliantly constructed, tightly paced thriller.

No. 23 Beulah Grove is not the most desirable residence in London. It’s been turned into bedsits and is run down, with dodgy boilers and drains.  The greedy landlord will rent a room to the most desperate of people, even whilst the previous tenant’s belonging are still in the room.   Rent is paid in cash, there are no reference checks and no documentation given. The people living here have their own secrets, most want to keep their privacy and none of them know that they have a killer living amongst them.

I’ve read many psychological/killer thrillers over the years and it’s rare that one makes me feel a bit queasy but at times this one did – which I think is to the author’s credit to be able to write a story that gets under your skin and make you feel and think.  There are some quite graphic and vivid descriptions which are quite chilling and stomach turning.  I’m not sure what made my skin crawl most whilst reading this.  It could have been the building’s owner and landlord, Roy Preece – the most disgusting and repulsive of men with no redeeming qualities whatsoever; or it could have been the thought of the drains being clogged up with body matter.

The story is set during a summer heatwave and thanks to the quality of the writing, you can feel the oppressive, stifling and suffocating atmosphere of the London streets.  There is a strange smell coming from the drains which the residents can’t identify but they know that it isn’t good.   The characterisations are excellent – these are people with flaws and secrets but they are all so realistic, even the killer is shown to have a gentle side whilst carrying out his vile procedures and is far from being portrayed as a stereotypical monster. When an unexpected event poses a direct threat to this motley group of people, they must work together to keep themselves safe and stop outsiders from discovering their secrets – they may think that the worst is over…..but of course they are wrong!

This is a gripping, tension filled read that will keep your attention.  We know from the police interviews at the very beginning that something bad has happened – we are then taken back in time to discover exactly what horrors have occurred.  The story is chilling and often gruesome but there is also some dark humour amongst the pages.   I couldn’t put it down and look forward to reading The Wicked Girls, currently sitting on my bookshelf.

Alex Marwood is the pseudonym of a journalist who has worked extensively across the British press. She is the author of word-of-mouth sensation, The Wicked Girls, which won the prestigious Edgar Award for Best Paperback Original in 2014, and was nominated for an International Thriller Writers Award in 2013. Alex lives in South London

2 thoughts on “The Killer Next Door – Alex Marwood”