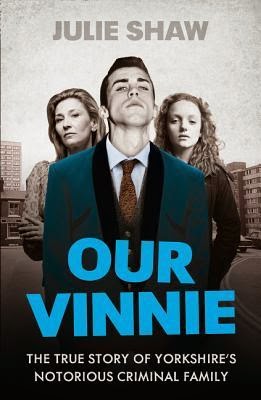 The infamous Canterbury Estate in Bradford, a hotbed of crime, drink and drugs, was a law unto itself in the ’70s. So when one of their own was wronged in any way, the community always had its own way of dealing with it.

The first title in a series of gritty family sagas, Our Vinnie accounts the dramatic true story of a brother’s determination to avenge his younger sister’s rape. Josie was just 11 when her Vinnie, then 14, was taken away to a detention centre. Distraught by his absence and left alone with indifferent parents, when she escapes from one of their rows she naively enters the house of a neighbour, Melvin, who – horrifically – leads her upstairs and overpowers her.

Convinced by her friend Carol, Josie tells her sister Lyndsey about the rape but, with Vinnie out of the picture, Lyndsey uses the information for her own ends. When Vinnie returns, hardened by years inside the system, his outrage on discovering the truth is severe. And with new abuses continually coming to light, a cataclysmic series of violent events begins to spiral out of control…

Dramatic and shocking, Our Vinnie is an unbelievable page-turner, documenting a community forsaken by society, and one brother’s unrelenting determination to take justice into his own hands.

This book is the first of a trilogy, and billed as a true story of Yorkshire’s notorious criminal family.

“Our Vinnie” is set in Bradford in the 1970s and is the story of Vinnie McKellan.  We first meet him when he is 14 years old and about to be sent to an approved school for petty thieving and general bad behaviour. Unfortunately, his behaviour doesn’t improve and so he is incarcerated for longer periods in even harsher institutions.  Despite his violent and hot tempered nature I found it impossible to dislike him – I probably would have felt differently had I thought he was inherently evil.

His younger sister Josie was my favourite character of the family.  She was a tough little girl and her home life wasn’t a happy one; her feckless parents and drugged up sister Lyndsey didn’t seem to care much for her at all and I suppose the lack of love and attention made it inevitable that she looked up to elder brother Vinnie.  He in turn was very protective towards his sister and it was partly because of this that he got into so much trouble when dispensing his own form of justice.

As you would expect with a book of this nature, there is a lot of profanity and some violence.  Although I did wince a little at some of Vinnie’s violent acts, this was actually no worse than any other book of this genre. Anyone who has read a Martina Cole book will know what I mean.

Julie Shaw has a very engaging style of writing.  The book was extremely readable and I raced through it quite quickly.  It’s not a big book at just over 320 pages but despite its relatively short length, the characters feel fully formed and the storytelling flows easily with quality content.

This was a hard hitting and thought provoking read.  At times I felt saddened and despairing because you could see history repeating itself  – the children being stuck in the same cycle of crime as their parents and being unable to change their lifestyle and circumstances.

My name is Julie Shaw, and my father, Keith, is the only surviving member of the 13 Hudson siblings, born to Annie and Reggie Hudson on the infamous Canterbury Estate in Bradford. We were and are a very close family, even though there were so many of us, and those of us who are left always will be.

I wanted to write these stories as a tribute to my parents and family. The stories are all based on the truth but, as I’m sure you’ll understand, I’ve had to disguise some identities and facts to protect the innocent. Those of you who still live on the Canterbury Estate will appreciate the folklore that we all grew up with: the stories of our predecessors, good and bad, and the names that can still strike fear or respect into our hearts – the stories of the Canterbury Warriors.

2 thoughts on “Our Vinnie – Julie Shaw”