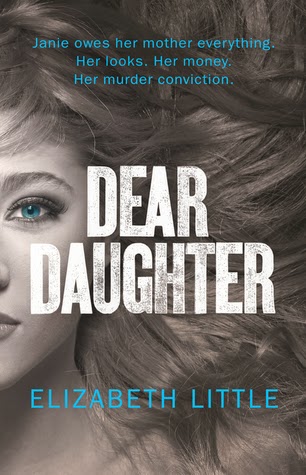 Published on 14 August 2014 by Harvill Secker

‘As soon as they processed my release Noah and I hit the ground running. A change of clothes. A wig. An inconspicuous sedan. We doubled back once, twice, then drove south when we were really headed east. In San Francisco we had a girl who looked like me board a plane to Hawaii.

Oh, I thought I was so clever.

But you probably already know that I’m not.’

LA It girl Janie Jenkins has it all. The looks, the brains, the connections. The criminal record.

Ten years ago, in a trial that transfixed America, Janie was convicted of murdering her mother. Now she’s been released on a technicality she’s determined to unravel the mystery of her mother’s last words, words that send her to a tiny town in the very back of beyond. But with the whole of America’s media on her tail, convinced she’s literally got away with murder, she has to do everything she can to throw her pursuers off the scent.

She knows she really didn’t like her mother. Could she have killed her?

Janie Jenkins had always had a tempestuous relationship with her mother, the murdered socialite Marion Elsinger.  Janie appeared to be a duplicitous and unlikeable person – so much so that at first I didn’t really care whether she had killed her mother.  However reading on, I found myself sucked into the story and my opinion of Janie started to change with her sarcastic and spikey comments even becoming slightly amusing.

After ten years in jail for a murder that she may (or may not) have committed, Janie Jenkins is released on a technicality although she will not be allowed to continue with her life in peace.  A news reporter/blogger has been hounding her during her time in prison and is continuing to try and track her every move and it’s down to Janie to keep one step ahead.

With snatches of memory returning of that night, and armed with a new identity, Janie sets out to try and find out whether she did actually kill her own mother.  She discovers that her mother had withheld a lifetime of secrets and in fact had accumulated her share of enemies over the years.

I didn’t really know what to make of this book – the first half of the book was a little too slow to make this a wholly enjoyable read.  Recalling some vague memory from the past, Janie starts her search by heading for an old mining town called Ardelle.  Some of the inhabitants of this small backwater town that Janie encounters seemed rather stereotypical – a few seemed just weird and creepy and I wasn’t sure who could be trusted. Janie’s interactions with them became interesting in that she had to reinvent herself in order to find out the information she needed. Being nice to people was something totally out of character for Janie.

The story did pick up pace in the latter stages and kept my interest all the way through with twists that I didn’t see coming.  Overall this was an interesting and commendable debut thriller with a clever structure and sharp and pithy dialogue and whilst it won’t be a contender for my book of the year, it turned out to be a very good read.

My copy was received from the Amazon Vine review programme.

Elizabeth Little was born and raised in St. Louis and graduated from Harvard University. Her work has appeared in the New York Times and the Wall Street Journal, among other publications, and she has appeared on All Things Considered, The World, and Here and Now. She has written two works of nonfiction: Biting the Wax Tadpole: Confessions of a Language Fanatic (Melville House, 2007) and Trip of the Tongue: Cross-Country Travels in Search of America’s Languages (Bloomsbury, 2012). Dear Daughter (Viking and Harvill Secker, 2014), her critically acclaimed debut novel, was a Los Angeles Times bestseller and is currently being translated into ten languages. Elizabeth lives in Los Angeles with her family.