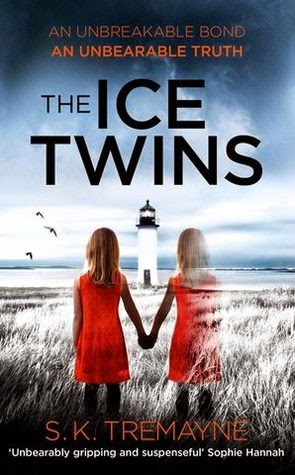 A year after one of their identical twin daughters, Lydia, dies in an accident, Angus and Sarah Moorcroft move to the tiny Scottish island Angus inherited from his grandmother, hoping to put together the pieces of their shattered lives.  But when their surviving daughter, Kirstie, claims they have mistaken her identity–that she, in fact, is Lydia–their world comes crashing down once again.

As winter encroaches, Angus is forced to travel away from the island for work, Sarah is feeling isolated, and Kirstie (or is it Lydia?) is growing more disturbed. When a violent storm leaves Sarah and her daughter stranded, Sarah finds herself tortured by the past–what really happened on that fateful day one of her daughters died?

Lydia and Kirstie are identical twins.   Even their parents have difficulty in telling them apart – although each girl has their own mannerisms and quirks which only become apparent as the girls grow older and develop their own personalities. When one of the twins falls from a balcony in a tragic accident, it is believed to be Lydia that has died however when, early in the story, Kirstie chastises her mother by saying “why do you keep calling me Kirstie, Mummy? Kirstie is dead.  It was Kirstie that died, I’m Lydia” – it is clear that it isn’t certain which twin died.  Being identical twins, DNA testing wouldn’t reveal any answers – so HOW would you know – and how well do you know your children?

Sarah and Angus Moorcroft have a fragile relationship and the death of their daughter seems to have torn them further apart instead of bringing them closer. When financial worries hasten a move from London to a remote Scottish island formerly owned by Angus’ grandmother, they up sticks and go even though Angus hasn’t been back to the island for 15 years; even though Sarah has never been there.

This is one of those books that draw you in as soon as you start reading.  At first I thought how incredibly stupid it was to move blindly to a remote, dilapidated cottage on an island that could only be reached by walking over mudflats at low tide, or by boat.  But besides solving their money problems, Sarah believed it would be a fresh start for them all and maybe she was right, after all the scenery was stunning and they could leave behind the physical memories of the accident.

The writing conjures up scenes of atmospheric intensity.  The isolation and the almost uninhabitable state of the cottage, the unpredictability and ferociousness of the Scottish winter – all are described so vividly that this creates a spooky element on its own.  However add in to the mix, guilty secrets, a troubled twin, a fractured marriage and you have a suspense thriller that will keep you wondering as you turn the pages.

This was a truly excellent read that kept me guessing the whole way through.  As events escalate and secrets unfold I certainly didn’t see the ending coming, but it was completely suitable for the story.

There is of course another mystery to be solved – that of the identity of the author!

S. K. Tremayne is the pseudonym of a journalist and bestselling writer, who lives in London.