We Are All Made of Stars – Rowan Coleman 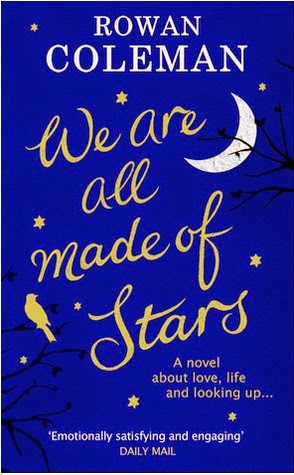 What if you had just one chance, one letter you could leave behind for the person you love?

What would you write?

Stella Carey has good reason to only work nights at the hospice where she is a nurse. Married to a war veteran who has returned from Afghanistan brutally injured, Stella leaves the house each night as her husband Vincent, locks himself away, unable to sleep due to Post Traumatic Stress Disorder.

During her nights at the hospice, Stella writes letters for her patients containing their final wishes, thoughts and feelings – from how to use a washing machine, to advice on how to be a good parent – and usually she delivers each letter to the recipient once he or she has died.

Rowan Coleman you have made me cry, again!  Followers of this blog will know that The Memory Book was one of my Top 10 reads of last year and now Rowan has written another emotional story which will tug at your heart strings.

The main character is ex-trauma nurse, Stella, who works nights at the Marie Francis Hospice and Rehabilitation Centre. She works nights so that she and her former soldier husband Vincent can mostly avoid each other. Stella looks at Vincent with love. Vincent looks at Stella and hates himself. He has returned from Afghanistan a broken man – both physically and mentally and even Stella’s love can’t bring back the man he used to be.

One of the kindnesses that Stella carries out for her patients is letter writing. She puts those poignant last words in a letter to their loved ones and promises to post it once they have passed. One of the many joys of this story are the letters separating each chapter. We never know who the people are but each letter tells its own story of sadness and humour – from a declaration of love to instructions on how to do the washing and where the life insurance policy is kept. Even though I am guilty of preferring to send an email rather than sitting down and penning a letter, there is no doubt of the pleasure and comfort that a letter can bring to the recipient.

The story is told from several viewpoints and even those patients who we meet only briefly, such as teenager Issy and her mother Thea, make their presence felt. Besides Stella, the other main character is Hope – one of the young patients in for respite care. She has Cystic Fibrosis and when we first meet her, she has fought off a severe infection from which she nearly died. Having faced death and won, she must decide how to make best use of however much of her life she may have left. The scenes with Hope and her best friend Ben were charming, even if sometimes the misunderstandings between them were a little frustrating.

There were two characters that I had a really soft spot for. One was Stella, and the other was Hugh. Hugh lives alone with a cat called Jake (- a cat who appears to have multiple personalities). He is a museum curator and lives a very solitary existence, unaware of the impact that the arrival of new neighbours will have on his life. At first he seemed to be a random character but as the story progresses his role becomes clear and it was actually the scenes with Hugh that made me cry the most.

Rowan Coleman has seamlessly weaved together a diverse set of characters to form a tender and uplifting story. The setting of a hospice does make this an emotional read, but it’s certainly not a depressing one. It’s a beautifully written story told with love and care relying on the sharpness of the dialogue and some of the wonderful letters for a much appreciated humorous touch (one of my particular favourites was from a 91 year old advising her newly born great-granddaughter). A very gentle tale of seizing second chances and fighting for those that you love, this was another 5* read for me and another sure fire success for Rowan Coleman.

My thanks to Amelia at Ebury for the paperback copy to review. 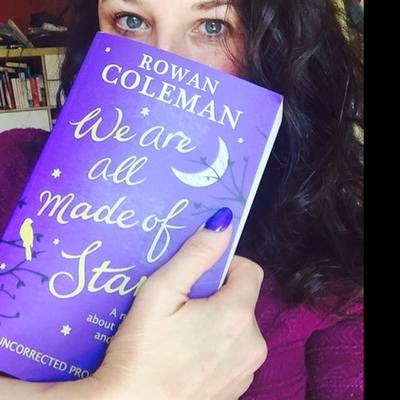 Rowan Coleman lives with her husband, and five children in a very full house in Hertfordshire. She juggles writing novels with raising her family which includes a very lively set of toddler twins whose main hobby is going in the opposite directions. When she gets the chance, Rowan enjoys sleeping, sitting and loves watching films; she is also attempting to learn how to bake.

Rowan would like to live every day as if she were starring in a musical, although her daughter no longer allows her to sing in public. Despite being dyslexic, Rowan loves writing, and The Memory Book is her eleventh novel. Others include The Accidental Mother, Lessons in Laughing Out Loud and the award-winning Runaway Wife, a novel which lead Rowan to become an active supporter of domestic abuse charity Refuge, donating 100% of royalties from the ebook publication of her novella, Woman Walks Into a Bar, to the charity. Rowan does not have time for ironing.

2 thoughts on “We Are All Made of Stars – Rowan Coleman”