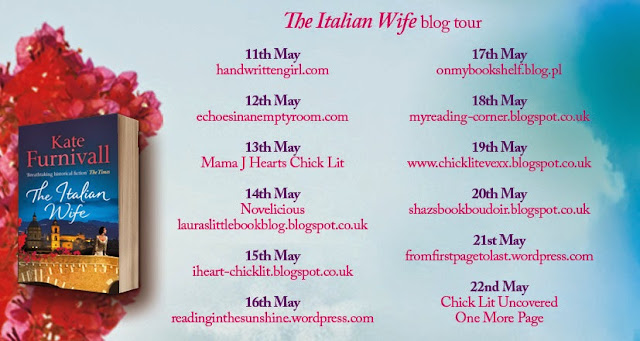 I’m delighted to be taking part in the blog tour for The Italian Wife, published on 7 May 2015 by Sphere and would like to say a big hello and welcome to My Reading Corner, Kate 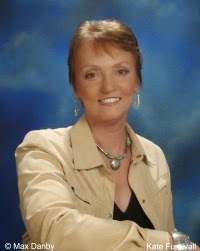 Hi, it’s great to be here. Thanks for inviting me.

What drew me to write about Italy?

Well, let’s face it, who wouldn’t want to write about Italy? It is a spectacularly beautiful country with an amazing passionate history, and during the Renaissance its people produced a creative brilliance that still stuns the world.

When I write a book, I nearly always start with place, and from the place emerges the plot. I like to find a point in a country’s history when change is taking place. At times like this, conflicts arise. People are pushed to their limits. Often the veneer of civilisation breaks down and fracture lines open up.

That’s when you see what people – and friendships – are made of. I love to explore these moments. To delve into how people react when the props of their lives fall away. I had always wanted to write a book set in Italy but hadn’t yet found my story, and then out of the blue my husband happened to mention that he’d seen a programme years ago about Mussolini building new towns on a drained swamp. I was intrigued and started digging!

Instantly I knew I had found my story. Oh yes! I can still recall that moment of visceral joy. I decided to make my heroine an architect in 1932.

The Pontine Marshes were a 300 square mile basin of malarial swamps just south of Rome, trapped between the Lepini Mountains and the Tyrrhenian Sea. Nero and Napoleon had both tried to drain it but failed. But in 1930 Mussolini brought in the might of the Fascist regime and modern machinery to drain the marches, using 125,000 workers, in order to build five new modernist towns on the land.

This was an amazing and exciting project that attracted the attention of the world, and I knew it would make a wonderful story. It was a dangerous world for my heroine to enter, a maelstrom of ambition and political intrigue, as well as a setting for romance, adventure and fierce loyalties. Mussolini kept a close eye on the creation of each town, but to risk displeasing him was to risk prison. So tensions arose and fear spread its tentacles. Each day I adored plunging into the thrill of this intense and fragile new world I was creating.

Of course, I had to do research. Lots of it. I learned about the hardships of Mussolini’s Fascist regime, about the brutality of his Blackshirt militia. And about what he called his Battle for Births policy which condemned women to staying at home to produce as many bambini as possible. This was a period in Italy’s history that I wanted people to read about and to see how one strong-minded woman like Isabella could make a difference.

All this naturally involved research not one, but two research trips to Italy. Well, someone had to do it! Someone had to go there to check out the local vino and stracchino cheeses, to sink teeth into succulent olives and amaretto cakesin one of the sunlit pavement cafes. And a swim in the warm waters of the cobalt Tyrrhenean Sea was obligatory. Of course it was!

I was utterly beguiled by Italy, by its wonderfully friendly people and the sumptuous food. I might even set a second book there ….. 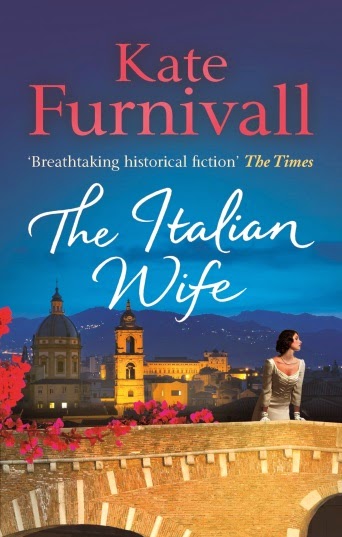 Perfect for readers of Santa Montefiore and Lucinda Riley, this powerful and evocative novel transports readers to 1930s Italy, before the dawn of World War II…

Italy, 1932 – Mussolini’s Italy is going from strength to strength, but at what cost?

One bright autumn morning, architect Isabella Berotti sites at a café in the vibrant centre of Bellina, when a woman she’s never met asks her to watch her ten-year-old daughter, just for a moment. Reluctantly, Isabella agrees – and then watches in horror as the woman climbs to the top of the town’s clock tower and steps over the edge.

This tragic encounter draws vivid memories to the surface, forcing Isabella to probe deeper into the secrets of her own past as she tries to protect the young girl from the authorities. Together with charismatic photographer Roberto Falco, Isabella is about to discover that secrets run deeper, and are more dangerous, than either of them could have possibly imagined.

From the glittering marble piazzas to the picturesque hillside villages and winding streets of Rome, Kate Furnivall’s epic new novel will take you on a breath-taking journey of intrigue, romance and betrayal.