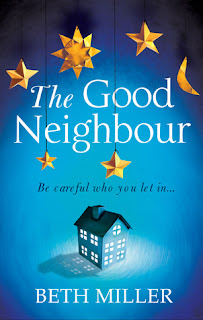 Everyone has secrets. How far will you go to protect yours?
After living next to the neighbours from hell, Minette is overjoyed when Cath and her two children move in next door. Cath soon becomes her confidante, a kindred spirit, even her daughter’s babysitter.
But Cath keeps herself unusually guarded and is reluctant to speak of her past. And when Minette witnesses something unspeakable, she begins to question whether she really knows her new friend at all…


An addictive and gripping novel, perfect for fans of Liane Moriarty and Daughter.

Yesterday as part of the The Good Neighbour blog tour, I had a great guest post from Beth talking about the English/American language divide and today it’s my review.

If you’ve ever lived next door to the neighbours from hell who complain about every little noise, then you would understand Minette’s joy at discovering that her obnoxious neighbours had moved away and a new family had moved in – Cath, her absent husband and her two young children.

Cath seemed very friendly and Minette was so bored and lonely being at home with a young baby and a boyfriend who didn’t pay much attention to her that she was more than happy to be friends and gratefully accepted Cath’s offers to babysit. Feeling vulnerable, Minette does something completely out of character and confides her secret to Cath. Little does she know that Cath has her own secrets and may not turn out to be such a good neighbour as she had thought.

From the very beginning I felt that something wasn’t right about Cath, I didn’t trust her and I didn’t have to get too far into the book before I realised where the story was heading.  Cath has two young children; Davey aged 8 and his younger sister Lola. Davey suffers from Duchenne muscular dystrophy and is in a wheelchair whilst Lola has multiple food allergies so Cath has her hands full trying to look after them both as well as doing her charity fundraising which included training for a triathlon. The closer Minette gets to Cath, the more she is drawn into her life; however the reader can see what Minette can’t.

The story is told from the three viewpoints of Cath, Minette and young Davey.  It was Davey’s voice that I found the most poignant – he is wise enough to realise that things are not right but too young to know what it is that’s wrong. The story kept me gripped all the way through. The deceit and the betrayal make for a very disturbing read and as the layers to the story are gradually revealed by the author I wanted to shake both Cath and Minette – for different reasons.  There were some parts that had me shaking my head in disbelief and which I didn’t feel were realistic however to say any more would spoil the story.

This is quite a difficult book to categorise. Its not a thriller but it is a bit darker than an ordinary family drama.  It will however keep your attention with the flawed characters and disturbing storyline. Much like real life, there were certain people that I took an instant dislike to. People only let you see what they want you to and it does beg the question can we really ever trust our neighbours, however friendly they may appear to be. Looking back at Minette’s neighbours – I wouldn’t want any of them living near me.  This is the first house I have lived in where I have trusted a neighbour with a house key, so I’m keeping my fingers crossed that mine are good ones!

I haven’t yet read Beth’s previous book, When We Were Sisters, but it will be going on my reading list.

My thanks to the publisher for providing a review copy via Netgalley.

Beth’s written two novels, When We Were Sisters and The Good Neighbour, both published by Ebury (Random). She’s also written a book called For The Love of The Archers, out in October. She is writing a third novel, which is so far only twelve chapters long, yet already has four different versions. One day she will learn to write efficiently.