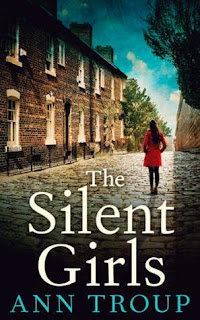 This house has a past that won’t stay hidden, and it is time for the dead to speak.
Returning to Number 17, Coronation Square, Edie is shocked to find the place she remembers from childhood reeks of mould and decay. After her aunt Dolly’s death Edie must clear out the home on a street known for five vicious murders many years ago, but under the dirt and grime of years of neglect lurk dangerous truths.


For in this dark house there is misery, sin and dark secrets that can no longer stay hidden. The truth must come out.


Finding herself dragged back into the horrific murders of the past, Edie must find out what really happened all those years ago. But as Edie uncovers the history of the family she had all but forgotten, she begins to wonder if sometimes it isn’t best to leave them buried.


An unforgettable and addictive story, perfect for fans of Lesley Thomson, Diane Chamberlain and Tracy Buchanan.

The Silent Girls is the second novel by Ann Troup. I bought her first, The Lost Child, last year; I very much enjoyed it and was looking forward to reading this next one. I’m glad to say I haven’t been disappointed and in my humble opinion The Silent Girls is even better. The story hooked me in from the beginning and it was one of those books that I sat up really late one night to finish.

Whilst her elder sister Rose is away on holiday, Edie is given the unenviable task of attending the funeral of her late aunt Dolly and clearing out her rancid and dilapidated house in Coronation Square in readiness for sale. Edie hadn’t been there for over 30 years and was shocked to see how the Square itself had declined and the squalor that her aunt had been living in.

Edie’s introduction to the property is marked by the attention of a ‘Murder Tourist’ group gathering outside. Many years before, several young women were murdered around the Square and a local man thought to be responsible was hung for the crimes. Ever since, the Square has received ghoulish attention and organised tours feed people’s hunger for the lurid details.

Edie had only just started clearing the house when a young homeless girl lets herself in. Apparently Dolly used to let Sophie Hedley stay when she was in trouble. The girl has clearly taken a bit of a beating; Edie takes pity on her and lets her stay on the condition that that she help with some clearing out. Whilst sorting through the rubbish, Sophie makes her own discoveries which adds to the mystery. I liked Sophie, she was streetwise and could be a bit mouthy but every now and again came out with some profoundly wise words.

There are many characters in this story, some are duplicitous and others just downright evil. Lena, the elderly neighbour seems kindly enough but does she know more than she is letting on? Edie has just come out of a bad marriage and when at her most vulnerable, isn’t always able to see people’s true motives. Along with Sophie, Edie was one of my favourite characters and I loved the way the relationship between them grew from wary strangers into a genuine friendship.

As the story progresses and the house gives up more of its grim secrets, Edie begins to find out more about her family than she ever wanted to know, not all of it pleasant. It does make you realise how easy it is for families to keep secrets and that lives can be built on lies.

Ann Troup is an excellent storyteller. The story flows easily and I very much enjoy her style of writing. With some dark humour, vivid descriptions and excellent characterisation, this is a story that will keep you turning the pages. There is so much mystery and intrigue surrounding this house and the family that it’s hard to keep up and if the fast placed plot doesn’t keep your interest then the many twists and turns certainly will. Add into the plot, a neighbour so obsessed with the killings they have set up their own incident room, a local gangster who gets a bit too close for comfort and all the long held family secrets and lies start to gradually spill out.  Very much recommended.

My thanks to Jenny of Neverland Blog Tours for the ebook to review. 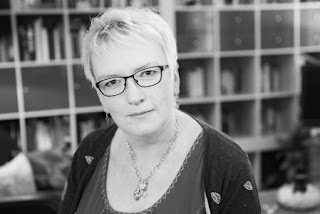 Ann Troup tells tales and can always make something out of nothing (which means she writes books and can create unique things from stuff other people might not glance twice at). She was once awarded 11 out of 10 for a piece of poetry at school – she now holds that teacher entirely responsible for her inclination to write.

Her writing space is known as ‘the empty nest’, having formerly been her daughters bedroom. She shares this space with ten tons of junk and an elderly Westie, named Rooney, who is her constant companion whether she likes it or not. He likes to contribute to the creative process by going to sleep on top of her paperwork and running away with crucial post-it notes, which have inadvertently become stuck to his fur. She is thinking of renaming him Gremlin.

She lives by the sea in Devon with her husband and said dog. Two children have been known to remember the place that they call home, but mainly when they are in need of a decent roast dinner, it’s Christmas or when only Mum will do. She also has extremely decent stepchildren.

In a former incarnation she was psychiatric nurse, an experience which frequently informs her writing. She has also owned a cafe and an art/craft gallery. Now she only makes bacon sandwiches as a sideline, but does continue to dabble with clay, paint, paper, textiles, glue…you name it. Occasionally she may decide to give away some of these creations (you have been warned!).