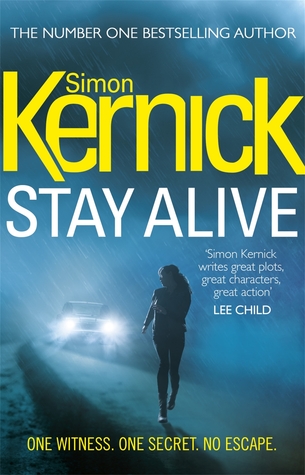 You’re on a trip with your family, miles from anywhere. A shot rings out – and your whole life changes in an instant.

A woman is racing towards you, chased by three gunmen. Although you don’t know it, she harbours a deadly secret. She’s in terrible danger. And now you are too.

You know that the men hunting you have killed before.

And if they catch you, you’ll be next.

I’ve read every one of Simon Kernick’s books and the one thing that you can always guarantee is that it will be a fast paced, tension filled experience; Stay Alive is no exception. It starts with a vicious double murder and, as you would expect with an SK book, the body count increases throughout the story.

It’s quite difficult to review this one – if I give too much detail about the plot then it will be necessary to include spoilers and really it’s a story best left for the reader to discover. The story centres around Amanda Rowan, she has interrupted a murder scene and has unwittingly put her own life in danger. For her own safety, she moves away to a remote Scottish village however the killer is determined to track her down and thus the story unfolds.

The short chapters make this an easy read, and if you are anything like me you will continue reading, thinking just one more chapter…and before you know it, it is the early hours! I sat up very late to finish it as I couldn’t put it down without knowing how it ended. This was such a fast paced story my heart was racing for much of it. There is no time for any in-depth characterisation – you learn about the characters as you go along and only know as much as you need to. As is often the case with this author’s books, some characters make a return appearance every now and again and it was good to see the return of detectives Mike Bolt and Mo Khan, who have featured in many previous stories. They are on the tail of a serial killer, known as The Disciple and it’s a race against the clock to catch him before he finds his next victim.

Simon Kernick is a master of twisty suspense – just when you think you know where the story is heading he will throw a curve ball and tease the reader with twists and turns. This book is definitely amongst his best so far and I can thoroughly recommend it.

Just one word of warning, if you intend to read “Wrong Time, Wrong Place” (one of the 2013 Quick Reads series) then I suggest that you read it before reading Stay Alive as this book contains a whopping big spoiler.

Simon Kernick is on Twitter and here on Goodreads